If you have been following my social media accounts, you would have known that last June, Tep and I had an amazing time visiting two countries from the Caucasus Region, namely Georgia and Armenia. Some of our friends were so engrossed with the pictures that we posted, that’s why they keep on asking us for our itinerary, as well as other details regarding our trip. On this blog post, I will try my best to give you as much information as I can to help you drafting your own itinerary. If you want to know how much we spent on this trip, I will be posting a breakdown of our expenses on the next few days.

Day 1: Arrival in Tbilisi – A Visit to Georgia National Museum and Mtatsminda Park

Coming from Doha, Qatar, we arrived in Tbilisi, Georgia around 12:20 AM via Qatar Airways. We took a taxi going to our hotel (Noah’s Ark B&B), checked – in and then took a rest. It was around 12:00 noon when we started our day going to the city center, which is a 20 to 30 minute bus ride from our hotel. Initially, our plan is to join a free walking tour of the city, however we were late, so I just decided to go somewhere else.

We first went to the Georgia National Museum where we spent almost 2 hours walking around. It’s not a big museum but there are some interesting stuff to see. 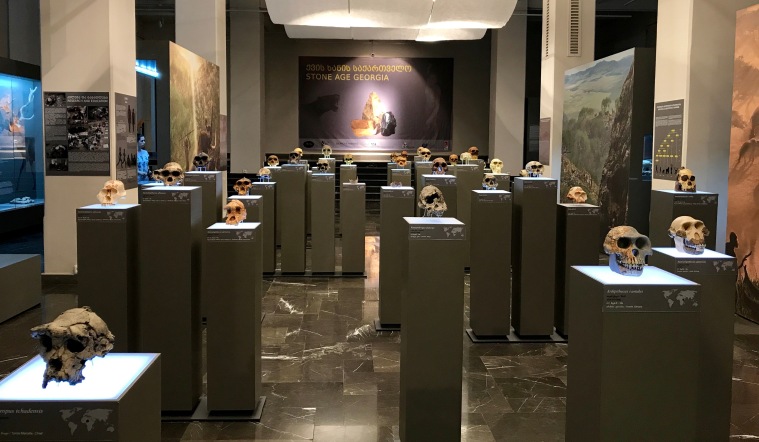 Stone Age Georgia – one of the sections in the Museum

Next, we headed to Mtatsminda Park. It is an amusement park located at the top of Mtatsminda Mountain, giving you a fantastic view of the city. 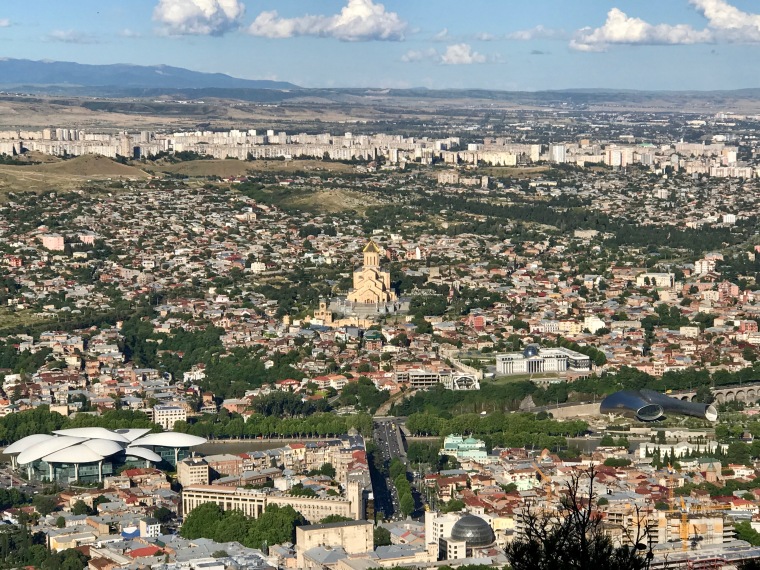 View of the city from Mtatsminda Park

It usually takes 6 to 7 hours to reach Armenia from Georgia by land. This is the reason why we started early that day. We were at the station around 8:15am but the Mashrutka left at 9:30 because it needed to get full before it can leave. When we reached the Georgia and Armenia border, all of us went down for the passport control.

It was almost 4:00 pm when we arrived in Yerevan, the capital city of Armenia. After checking in at our rented studio apartment (Apricot Studios), we walked for 10 mins towards the city center. We stopped for a while at St. Gregory the Illuminator Cathedral, which is the largest Armenian Church in the world. Again, we were supposed to have a free city tour but since it was raining, we just cancelled it and had dinner at one of the local restaurants. 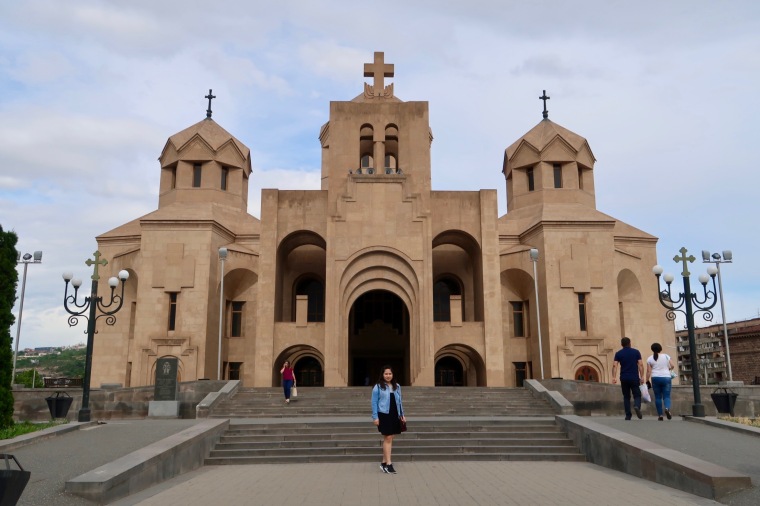 This was the longest day tour that we had during this trip, but believe me, it was worth it. We started at 6:30 AM and we were back at the apartment around 12 midnight. Tatev Monastery was our main destination for this tour and it is located on the south most part of Armenia. You can reach this Monastery either by car or by riding a cable car, called Wings of Tatev. Apart from this, we also visited other places such as Khor Virap Monastery, Areni Winery, Noravank, Tatev Devil Bridge, Harsnadzor and Shaki Waterfalls. I will be writing more about this tour soon.

Our host at the apartment recommended a guy, named Artur, to be our driver/guide for this tour. We also got his service for the rest of our days in Armenia.

Day 4: Mt. Aragats Tour / A short trip to the city at night

It was only on the night of Day 3 when we decided to do this tour. We were supposed to go back to Georgia by train this day, but we totally changed our minds when we learned the places that we will see on this tour. There were 5 stops, which enabled us to visit monasteries, see stunning views of Armenia and experience snow. 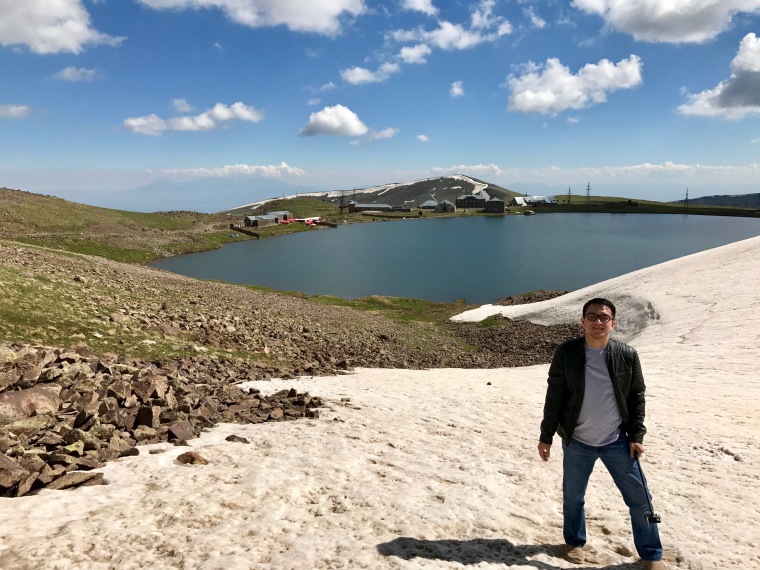 The snow and lake in Mt. Aragats

After the tour, we went to the city center to watch the fountain show at the Freedom Square. It was not the best fountain show I’ve seen, but consider checking it out. This was also the time that we visited the Yerevan Cascade, which is a 500 step stairway that got multiple levels with fountains and sculptures. Once you reached the top, you will be rewarded with a breathtaking view of the city. 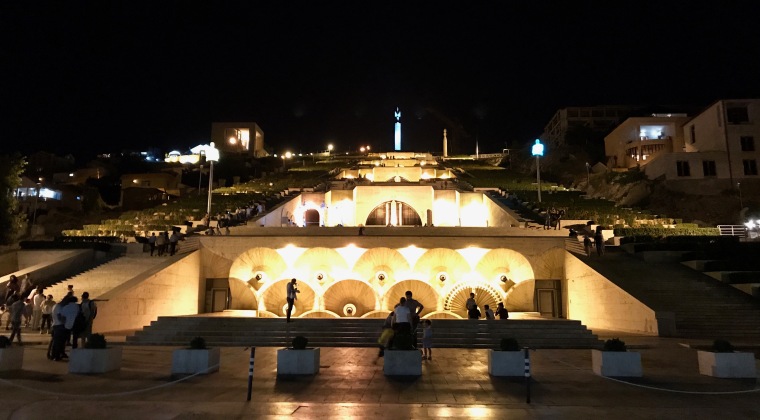 The Cascades at night

Day 5: A Private ride from Armenia to Georgia with a side trip to Garni Temple, Geghard Monastery and Lake Sevan

On this day, we hired the service of Artur again to get us to Georgia. But before waving goodbye to Armenia, we made side trips to Garni Temple, Geghard Monastery, Sevanavank and Lake Sevan, which were along the way.

When we reached Georgia, we immediately checked in at Hotel Four Brothers, then had dinner. Afterwards, we just roam around Rike Park and Bridge of Peace which were a few walks from our hotel. 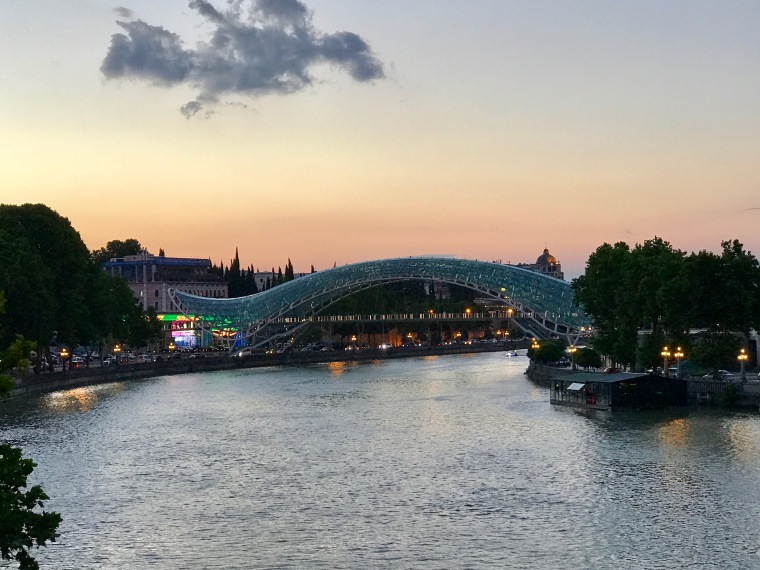 Day 6: A Long Drive to Vardzia Cave and Rabati Castle

Two of our friends from Qatar joined us on this trip and we hired Kartveli Tours to take us to Vardzia Cave and Rabati Castle. It took us four hours from the city by car to reach our first destination. We spent some time walking around Vardzia Cave, which is a monastery built on the slopes of the mountain. The hot weather of Georgia that day was too much for us to handle, the reason why we were not able to reach the end of the cave. Then, we drove for another hour to get to our next stop which was the Rabati Castle. After spending some time at the castle, we immediately went back to the city.

Our tour started at 9:00 am and was provided by Kartveli Tours. This was the day that I’ve been looking forward to because of the paragliding experience which we did at Guduari. But apart from that, we also visited Zhinvali Water Reservoir, Ananuri Fortress, Friendship Monument, Kazbegi and Gergeti Monastery. We also got the chance to have lunch with a local family and they even taught us how to make Khinkhali, a Georgian dumpling. 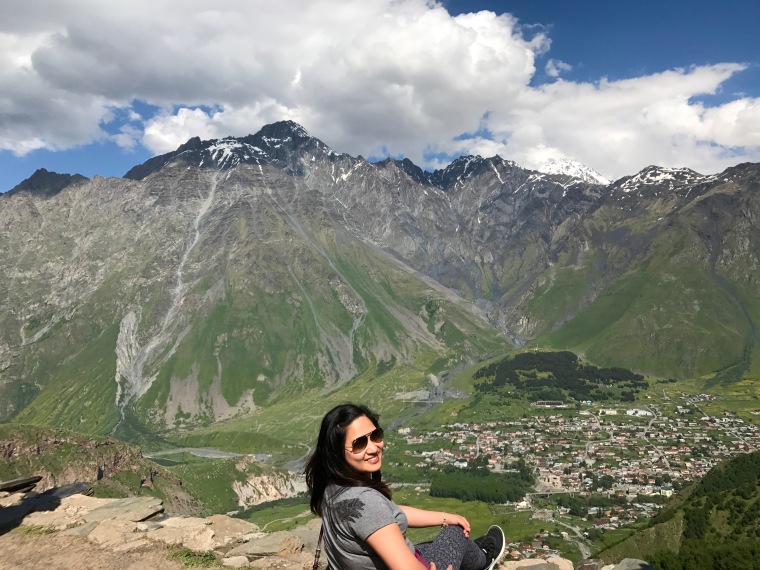 For this day, we got our tour from G7 Euro Travel and Tours (including the tour for Day 9 and airport drop off). There were various places that we visited on this tour such as Bodbe Monastery, Signaghi (known as Georgia’s City of Love), Ilia’s Lake and Chelti Winery in Kakheti, where we learned the process of wine making and got the opportunity to taste Georgian wines and chacha (vine vodka). 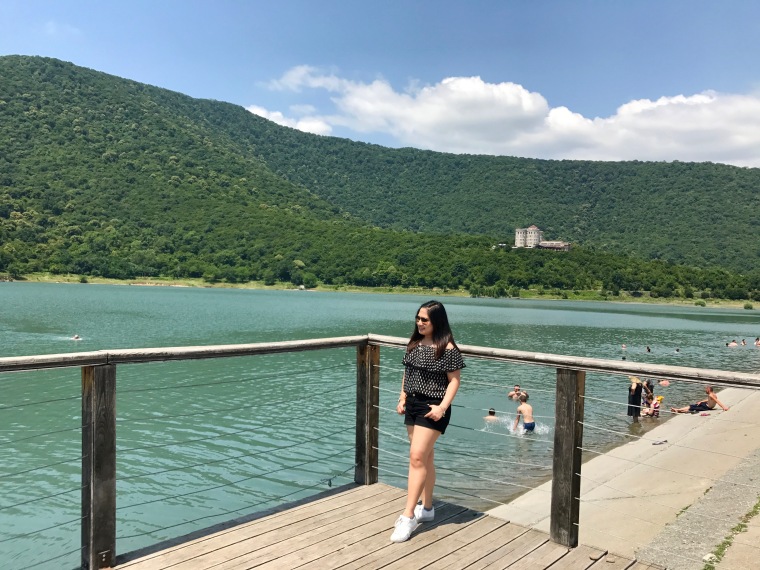 Upon reaching the city center after the tour, we hopped on the cable car that brought us to the Sololaki Hill. We just walked around the area which offers a great view of the city. This is also the place where you can see the statue of Kartlis Deda (Mother of Georgia) and the Narikala Fortress.

Day 9: Temca, Mtskheta and Gori Excursion / Flight back to Doha

Started our last day with a drive to Temca to see The Chronicles of Georgia, which is a massive structure depicting the history of Christianity in Georgia. Next we went to Mtskheta to see Jvaris Monastery and Svetitskhoveli Cathedral. Then we’re off to Gori where we visited Uplitsikhe and Gori Fortress. We were back in the city around 7:00 pm. 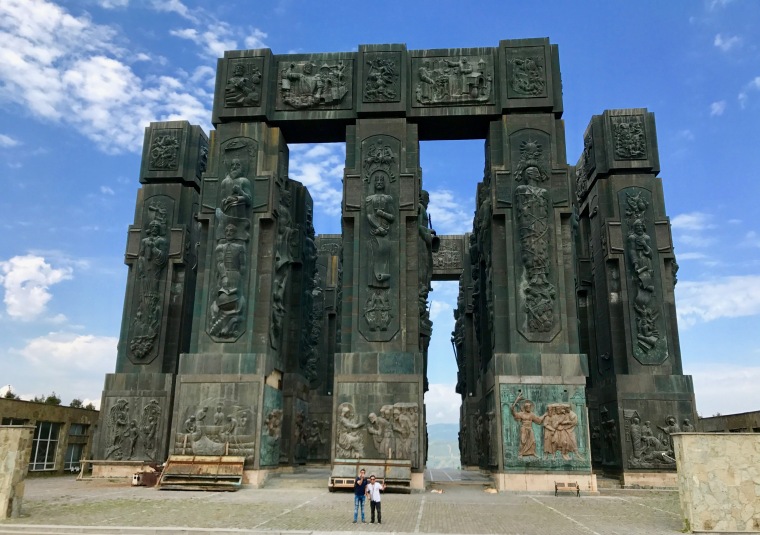 The Chronicles of Georgia with these two that we met during this tour.

Initially, our plan was to either have a massage or roam around the city while waiting for our 2:00am flight. But it rained so hard, that’s why we just stayed at the hotel and had dinner afterwards at a local restaurant.

We were picked up at the hotel for drop off to the airport around 11:00 pm. Then we fly back to Doha, Qatar.

So that concludes our amazing 9 day trip to Georgia and Armenia. Everyday was fully packed with activities, but we still got plenty of time to rest since most of the tours usually ends around 8:00pm, except for Day 3. I will be writing more about each tour on the succeeding blogs. Hope this will help you for now, especially if you are planning to go during the Eid Al Adha holiday.

P.S.: By the way, I properly planned this trip, however, there are really some circumstances that is way out of our control. That is why, it is always best to have Plan B.

Maria Ingrid is a CPA by profession and a blogger on her free time. Currently living in Doha, Qatar but hailed in Manila, Philippines. She created Wander with MI to write about her thoughts on a lot of stuff and the things that makes her happy: travel, food, new adventures and fashion. Hope you will enjoy reading.